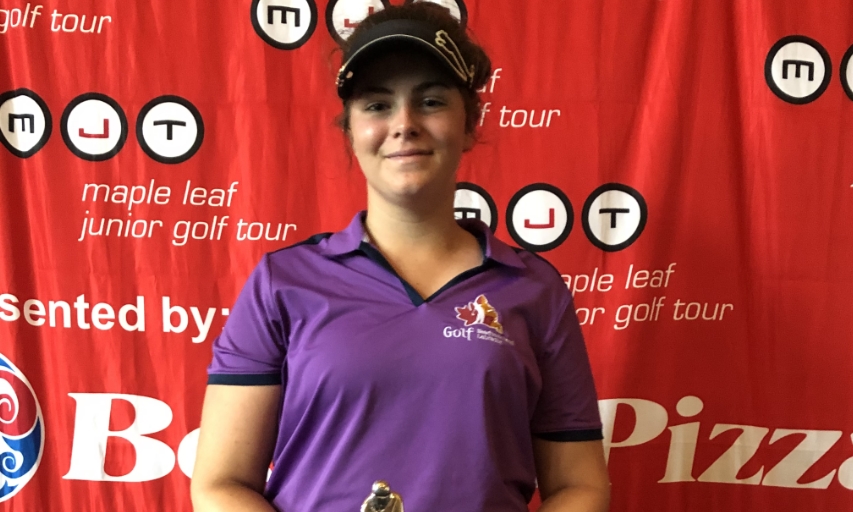 DIEPPE, New Brunswick — On July 20 and 21, the Boston Pizza-presented Maple Leaf Junior Golf Tour held the third of the three-event Bell Aliant-sponsored tournaments for the 2019 season at Fox Creek Golf Club in Dieppe, NB, where boys and girls from all over the Maritimes gathered to compete for titles in seven divisions in the Golf Canada-ranked event, as well as the chance to be selected for Team East in the MJT National Team Challenge presented by Freedom 55 Financial at Royal Niagara Golf Club in Ontario later this season.

What a tournament it was for 12-year-old Chase Burgess from Petitcodiac, NB, who not only won his first career MJT title in the Peewee Boys Division, but also achieved the prefect shot with a Hole-In-One on the 13th during the second round. “I feel really good about winning the tournament and the highlight was definitely the hole-in-one,” he said, after shooting rounds of 84 and 72 (156) to walk away with both the Hoselton trophy and a MJT Booster Juice Comeback award for the most improvement in score over day one. Finishing second in the division was Truro, NS-resident, Elliott Mullen, 11, who fired scores of 86 and 87 (173).

Adding to the excitement in the tournament was a playoff between Moncton, NB-player, Mackenzie Deveau, 16, and Corner Brook, NL-player, Taylor Cormier, 17, who needed extra holes to crown a winner in the MJT Girls 15-18 Division. Cormier (74, 78 - 152), took a five-shot lead after round one, but that lead was quickly eliminated after the first nine holes of the second day. Deveau (79, 73 - 152), who acquired a one-shot lead going into the final hole, made an unfortunate bogey, which set the stage for the playoff. It took Cormier two playoff holes to close out the victory and claim her first Hoselton trophy in her first ever MJT tournament. “I shot my lowest [career] score on the first day and that got me on the right track. This was the first MJT tournament I competed in and I look forward for the chance to compete in another one soon.” Local-competitor, Julie Gauvin, 17, shot scores of 80 and 76 (156) to finish in third just four shots behind.

Daniel Kirby, in the MJT Juvenile Boys Division, made 11 birdies and an eagle on his way to winning with two under-par scores of 71 and 70 (141). The 16-year-old player from Woodstock, NB, who plays out of Covered Bridge Golf and Country Club, grabbed his first MJT win since 2017. Pleased with the consistency between his rounds, Kirby commented, “I’m happy I was able to post good scores on both days.” Runner-up in the division was 15-year-old, Owen Canavan, of Hammonds Plains, NS, with scores of 78 and 72 (150).

The Junior Boys title was captured by Fall River, NS-resident, Rory White, with rounds of 73 and 76 (149). White, playing in his first career MJT, picked up the Hoselton trophy with a two-shot victory. “I’m excited that, despite not playing my best at times, I was able to keep calm and persevere through the round,” he said. “The conditions were tough, the competitors were strong and I was happy to come out with the win.” Two-year MJT contender, Liam Llewellyn, 17, of Edgetts Landing, NB, picked up his second consecutive runner-up finish with scores of 74 and 77 (151).

Winning by a one-stroke margin in the MJT Bantam Boys Division was Truro, NS-native, Simon Mullen, 13, over Dieppe-local, Jacob LeBlanc, 13. Mullen (82, 82 - 164), who obtained a four-shot lead after the first round, survived a late surge from LeBlanc (86, 79 - 165) that included an even-par performance on the back nine of his second round.

MJT rookie, Katie MacIntyre, 13, of Beaver Bank, NS, captured the MJT U15 Girls Division over Stephanie Roy, 14, of Dieppe, with scores of 83 and 80 (163). MacIntyre said afterwards, “I really think that I improved a lot this tournament. The highlight for me was meeting new people, everyone was really friendly!”

For PLYR Long Drive, PLYR Closest-to-the-Pin and the MJT Booster Juice Comeback Award winners, please visit the highlights page for the tournament here. Winners of the team selections will be announced once qualifying has completed.