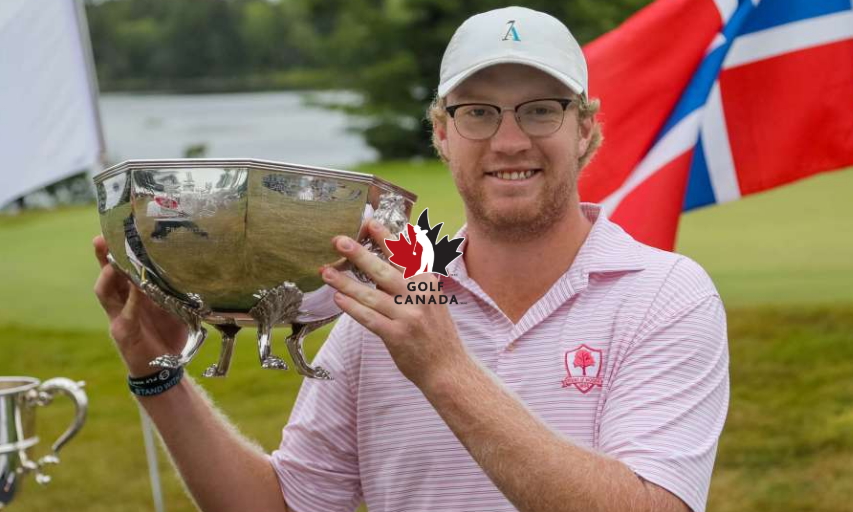 HAMMOND PLAINS, Nova Scotia — A final round of 1-under-par 69 from William Buhl was enough for the Fairhope, Ala., native to capture the 115th playing of the Canadian Men’s Amateur Championship held at Glen Arbour Golf Course in Hammond Plains, N.S.

Buhl, who was born in Oslo, Norway, was bogey-free during the final round. His final putt of the competition on the par-4 18th hole was his lone birdie on the day, capping four consecutive rounds in the 60s.

The 22-year-old carried a five-stroke lead into the final round, finishing the tournament at 9-under-par 273, eight strokes clear of his closest competitors.

“It probably looks boring on the scorecard, but I had to grind a little bit for those pars,” said Buhl. “I had three or four eight-to-ten footers for par. It felt great to finish off with a birdie like that, especially in front of the crowd.”

Buhl, a member of the University of Arkansas golf team, is the second Norwegian to play the Canadian Men’s Amateur in the competition’s 115-year history. With the victory, he is the first Norwegian to win a tournament on Canadian soil since Suzann Pettersen won the (now defunct) 2015 Manulife LPGA Classic as well as the 2009 CP Women’s Open.

Finishing eight strokes back of Buhl at 1 under were Calvin McCoy (Highlands Ranch, Colo.) and Luke Kluver (Norfolk, Neb.). McCoy ascended the leaderboard Thursday with three consecutive birdies on holes No. 2 through No. 4, while Kluver, who entered the final round alone in second, five shots back of Buhl, carded 2-over 72 for a share of runner-up honours.

Sam Meek of Peterborough, Ont., finished as the low Canadian. The 2016 Canadian Junior Boys champion’s final round of 2-under 68 moved him to even-par for the tournament, good for a share of fourth.

Glen Arbour Golf Course played host to the 115th Canadian Men’s Amateur Championship alongside The Links at Brunello, who co-hosted the 264-player field during the first 36 holes.

Golf Canada has also confirmed that the 2020 Canadian Men’s Amateur Championship will be conducted in Calgary, Alta. at The Glencoe Golf and Country Club (on both the Forest and Meadow Courses) August 3-6, 2020.