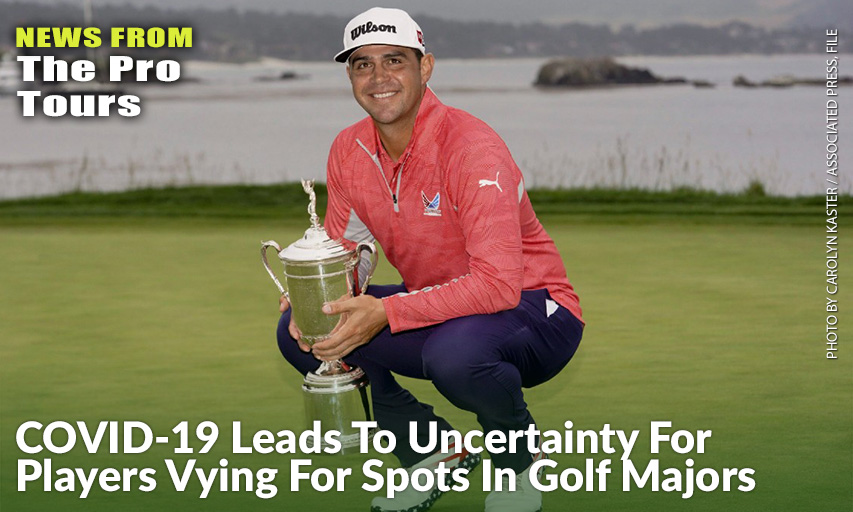 The new slogan the U.S. Open introduced is an indication of how complicated it will be for golf to resume, assuming it ever does this year.

It’s not a matter of when the majors are played. It becomes a question of who plays.

The branding campaign called “From Many, One,” touches on the identity that sets the U.S. Open — men’s and women’s — apart from the other majors.

The U.S. Open usually gets about 9,000 entries who go through 18 holes of local qualifying or 36 holes of sectional qualifying, sometimes both. From that comes the 156-man field, half of whom have to qualify.

The USGA is sticking to its principles, at least for now, by scrapping qualifiers for men and women in May.

The U.S. Women’s Open is to be played June 4-7 in Houston. The U.S. Open is set for June 18-21 at Winged Foot, located about five miles away from the new coronavirus containment zone set up in New Rochelle, New York.

Both remain on the schedule.

Before contemplating location, consider the calendar.

The Centers for Disease Control and Prevention got everyone’s attention when it recommended that events of 50 people or more not be held until May 10, at the minimum.

Those have been cancelled.

The USGA said it would work with its partners to “redesign qualifying going forward as events unfold.” Exactly how that unfolds might be the toughest test in golf.

To attempt a solution is the right course.

It’s not really a U.S. Open without qualifying at all levels. The 18-hole local qualifiers, while not as memorable as who ends up winning, are still important. That’s what the brand campaign suggests, anyway.

But it goes beyond qualifiers.

Exempt players include the top 10 on the LPGA Tour money list through April 15, and the top 75 in the world ranking. Keep in mind the LPGA has played only four times this year — twice in Florida, twice in Australia — before cancelling or postponing six straight events, with perhaps more to follow.

The British Open, scheduled for July 16-19, already has held four of its international final qualifiers, most recently at Bay Hill two weeks ago, with the next one scheduled in Japan at the end of May. It also takes the top 50 in the world, typically in late May, at which point a golf tournament might not have been played. The next event on the European Tour schedule, for example, is Denmark on May 21-24.

The Masters was the first men’s major to be postponed, scheduled for April 9-12. Moving to May, right about the time the club closes for the summer, would seem to be a long shot. If that’s the case, it would be simple enough to add the top 50 from the world ranking not already in — four players based on this week’s ranking.

If it moves to the fall, Augusta National could save the PGA Tour winners after April 12 and any late entries to the top 50 until the 2021 Masters.

As for scheduling? That will require a new level of co-operation among the four organizations than run the majors and the PGA Tour and European Tour, which supply the majority of the players.

It will be a shorter season, if there is a season.

Still to be determined is the fate of the Olympics in Tokyo this summer, though the IOC is probably two months away from deciding. That involves qualifying in other sports that make golf look easy by comparison.

If no golf is played before the golf qualifying ends on June 22, the top four Americans would be Justin Thomas, Brooks Koepka, Webb Simpson and Xander Schauffele — followed by Patrick Reed and Patrick Cantlay if any of the four choose not to play. That’s according to a world ranking expert known only as “Nosferatu” on Twitter.

So it would look bleak for Tiger Woods chasing a gold medal.

Then again, if the Olympics are not held, that would be the least of anyone’s concerns.