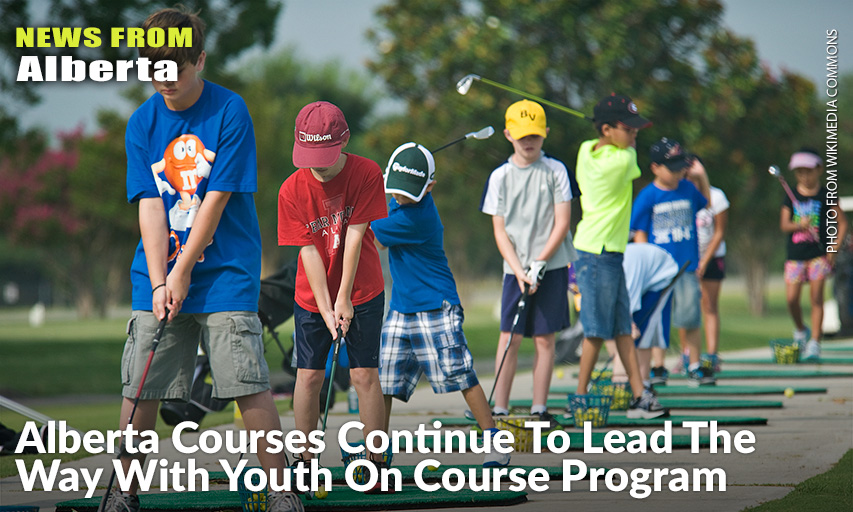 EDMONTON, Alberta — Alberta Golf, and in particular 22 courses attached to the provincial body tasked with governing amateur golf in the province, are doing their best in these trying times to grow the game through youth participation.

When they joined the Youth on Course movement, the idea of letting kids play a round of golf for a $5 green fees seemed almost absurd. While young people didn’t make up a big percentage of green fee players, they were still money in the bank when they teed it up, as they paid much higher rates than those suggested by this American-based program, which is huge down south.

But, after only a year the only such program in Canada is proving to be a great idea, both for the kids and the courses involved. Last year, over 1,000 youngsters took advantage of the Youth on Course idea which is open to those aged between six years and 18. This spring, five more courses in Alberta have joined the fold, bringing the total to 22 with the hope that the numbers of kids taking part soars.

Kevin Smith, the Director of Communications for Alberta Golf, explained that courses involved in this program do get more than the low fee paid by young golfers. Each layout keeps track of the number of kids that play through the program and submit an invoice to Golf Canada which then tops up that fee.

Speaking to how this program has grown in Alberta, Smith explained, “Certainly the program, based out of California, was doing very well over the last decade down in the United States. We brought it to Alberta in 2019, the pilot province, and we started with 17 courses last year.”

“Word has spread that it’s such a great program. We’ve expanded to 22 courses with a course in Lethbridge, which we didn’t have last year. Now, geographically, we feel we kind of have the province covered,” at this time, with participants in all major centres other than Fort McMurray and Grande Prairie.

One of the earliest proponents of this idea was RedTail Landing, a busy 18-hole facility just outside of Edmonton. The head professional there, Joshua Davison, is enthusiastic about what this is all about and he doesn’t hide those feelings.

“I can tell you it was extremely popular last year and even more so this year. Last year was a huge success in terms of gaining traction and the momentum has carried on into this year. During the time we’ve been open (since early May) I’ve probably put through 50 to 60 in this program.”

As Davison spoke, he was thrilled to see two more young players who make use of the program enter his pro shop. At that same time about a dozen or so others were out on the course enjoying the day. RedTail doesn't restrict these junior times during weekdays, and they are available anytime after 2 p.m. on weekends.

Further south, in Lethbridge, Matt MacDonald from the Henderson Lake Golf Club, said they’d been approached in the winter about becoming a Youth on Course advocate, and jumped on board and so far, so good.

“I was instituted as the junior coordinator back in 2017 and we found there were a lot of youth that weren’t getting out on the golf course,” said MacDonald, so this idea fit into the plans of changing that. “We were approached by Alberta Golf about this program and it seemed like the perfect fit for us.”

“We’ve had about a dozen kids show up so that’s been excellent with some new faces we’ve never seen before. The strange part about it for us, actually, is we’ve seen a huge uptick in the number of junior memberships this year,” where parents have decided that annual fee is equivalent to paying on a per-use basis. “Obviously, they can pay their $5 per time, but a few parents have inquired about it and then with membership prices at $375 a year, just did that.”

Although they’re new to the program, the club is looking at this gaining traction as word spreads, said MacDonald. “Quite honestly, we’re happy to let it grow exponentially. This fits in with our twilight time, so anytime after 2 p.m. they can come and play. Quite frankly, we’d rather have them here,” than sitting at home playing video games.”

Back in Edmonton, Davison encouraged courses not involved with Youth on Course to study this idea more closely to see the benefits, on both sides of the ledger.

“I have a lot of parents ask me, ‘What’s the catch?’ There isn’t any. It’s really that good,” with no hidden costs to the kids/parents whatsoever. “This makes it fun, affordable, so we can hold onto and get the next generation of golfers loving this game and participating. I can’t say enough about it. It’s fantastic!”

With golf being the only ‘group’ sport presently allowed under the reopening strategy of COVID-19 protocols in Alberta, Smith has the hopes that the sport will benefit greatly from kids deciding to give the game a try because, in reality, there isn’t much else to do right now.

“This program, with the courses involved that were just announced, might now be getting a lot of attention,” he noted. “I think it’s certainly a possibility, for sure,” he agreed in relation to seeing the program explode this summer with kids looking for something to do and the “barrier of cost,” eliminated with the Youth on Course inexpensive playing fee. “It does have a lot of potential to explode, potentially.”

Alberta golf courses that are presently enrolled in the Youth On Course program include:

Courses interesting in joining the Youth on Course program can contact Kevin Smith at This email address is being protected from spambots. You need JavaScript enabled to view it. with any questions they may have.