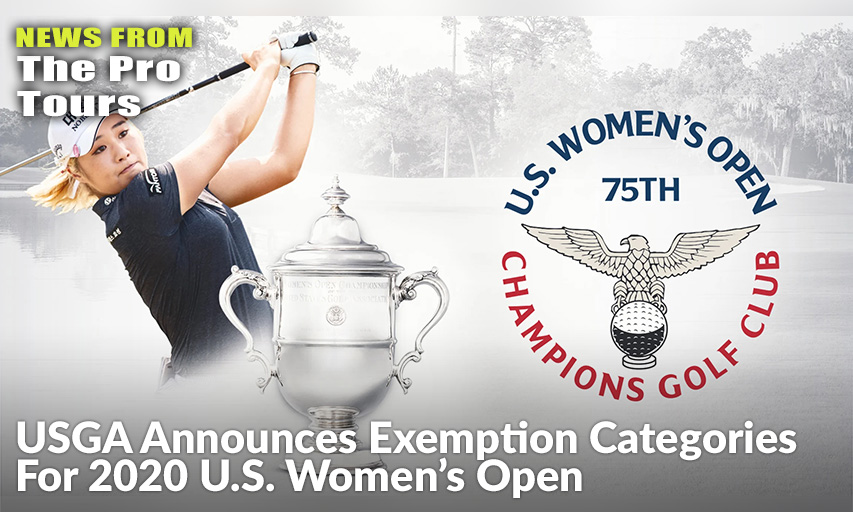 The United States Golf Association (USGA) announced the exemption categories for the 75th U.S. Women’s Open Championship, which will be contested December 10-13 at Champions Golf Club, in Houston, Texas. As previously announced, the 2020 U.S. Women’s Open field will be comprised entirely of exempt players due to the impact of the COVID-19 pandemic. Full exemption categories can be found at www.uswomensopen.com.

“We are extremely pleased to still provide the world’s best professional and amateur players the opportunity to compete for this historic championship, despite forgoing qualifying,” said John Bodenhamer, USGA senior managing director, Championships. “After carefully examining previous years, these exemption categories allow us to closely mirror a traditional field, and we are excited to witness one of these players win what will truly be a milestone 75th U.S. Women’s Open.”

In addition to the customary U.S. Women’s Open exemptions, the 2020 field of 156 players will include the top 75 point leaders and ties from the Rolex Women’s World Golf Rankings, as of March 16. Players who finished in the top 30 of the LPGA Tour’s 2019 Race to the CME Globe Final Points Cup list will also be exempt.

To ensure that those in the best form leading into the championship receive a place in the field, players who are not already exempt can earn a spot from their position on LPGA Tour’s 2020 official money list (top 10) or the Symetra Tour’s official money list (top 5) through Nov. 11. Exemptions will also be available based on performances in the following events on the 2020 LPGA Tour schedule: Walmart NW Arkansas Championship, Cambria Portland Classic, ShopRite Classic and KPMG Women’s PGA Championship.

An average of 25 amateurs have competed in the last three U.S. Women’s Opens, including Gina Kim, who tied for 12th last year at the Country Club of Charleston (S.C.). The World Amateur Golf Ranking® will be utilized to fill the amateur contingent at Champions Golf Club, as the top 20 point leaders who are not otherwise exempt as of Nov. 4 will be added to the six amateur categories already employed. Amateurs have historically enjoyed tremendous success at the U.S. Women’s Open, including 1967 champion Catherine Lacoste, Jenny Chuasiriporn, who finished runner-up in 1998, and Brittany Lang and Morgan Pressel, who shared runner-up honors in the memorable 2005 U.S. Women’s Open at Cherry Hills won by Birdie Kim.

Remaining spots in the championship will be filled using the Rolex Rankings as of Nov. 9. More information on exemption categories and the entry application process can be found in Frequently Asked Questions (FAQs).