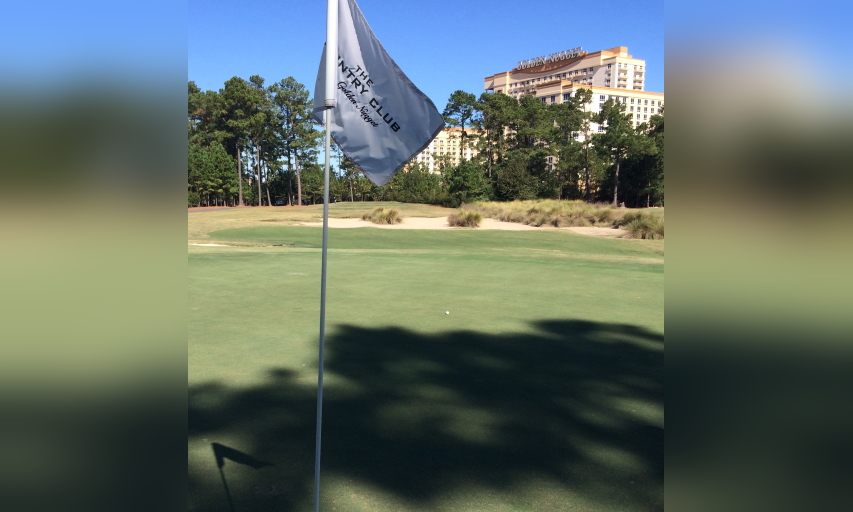 LAKE CHARLES, Baton Rouge, Louisiana — Gambling games and golf are conjoined entities for many recreational players. I mean, who hasn’t teed it up in a Split Six or Bingo Bango Bongo match-up on the first tee? While those are often bets that rarely exceed a $5 maximum per nine holes, there are golf courses built around a higher-stakes version of gambling and two such sites are big draws in Louisiana.

The L’Auberge Casino Resorts in Lake Charles and Baton Rouge, offer round-the-clock play in their upscale betting areas that include anything and everything under the sun for playing against the house. But during daylight hours, we are here to golf and there are some great tracks to tee it up on and perhaps earn a few extra bucks on the course to lay down a wager later on in the evening.

Speaking of having a few dollars to stuff into your wagering wallet, the green fees, including power cart, at the courses we played on the Louisiana Golf Trails are reasonable although, as one would expect, they are higher at the big-name courses. The TPC Louisiana (reviewed in Part 1) topped our list at $171 (all prices in US$) while The Country Club at Golden Nugget (reviewed below) is close behind at $159 for public play or $139 for hotel guests. The best deal, at least in my opinion, was at the Mallard Golf Club (also reviewed below), which the City of Lake Charles owns thus they set the rates. For weekday play on this great links-style layout, green fees are $32 to $44 or if you’re a senior and walk, they drop to only $17! Other fees at the courses we toured ranged anywhere from $59 at Farm d’Allie (reviewed in Part 2) down to $45 at the Island GC (also reviewed below) and Atchafalaya at Idlewild (reviewed in Part 2).

So yeah, even if you don’t clean up on the course, you’ll still have some money left after green fees, lunch, and a beverage of two to enjoy the nightlife in Lake Charles or Baton Rouge at the L’Auberge Casino.

The Country Club at Golden Nugget

This is the most expensive tee time in the Lake Charles area, but it’s worth every penny. This layout, designed by Todd Eckinrode and which has played host to the Korn Ferry Tour, offers up a great variety of holes including long and short par-4s making for some great scoring opportunities. Two of those short-4s are No. 10 at 290-yards and No. 13 at 285. No. 11 evens the distances up a bit, playing to 418-yards, also as a par-4. From the longest tee, this course plays to 7,000 yards. The other three tees range in distances from 5,300 yards up to 6,100 and 6,400.

Built right on the bayou, The Country Club at Golden Nugget presents you with plenty of hazards scattered about, including over 15 acres of waste bunkers. And be advised, this isn’t your typical resort-style course. While the fairways are wide, when you take into account all the greenside bunkers, water hazards, and ornamental, but penal grasses along the edges of the fairways, this is a track where hitting the short grass is key to scoring well. 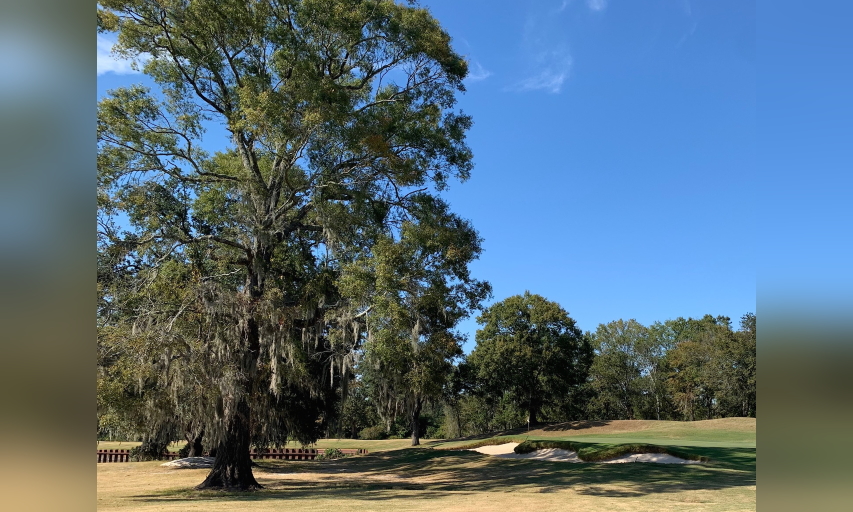 If You Can Manage To Get Through The First Three Holes On Each Nine At The Island Golf Club Unscathed, Or At Least Not Too Far Over Par Considering The Difficulty Of Those Holes, You Stand To Have A Good Number On Your Scorecard At The End Of The Day.

This is literally a golf course that was pulled off the ‘COVID-19 sick list,’ as it was shut down for 18 months during the pandemic. It has now found good health, thanks to a strong push by the local neighbourhood. Those folks wanted to keep the facility operating so they went above and beyond to do so. They retained the superintendent and mechanic during the closure to keep the course salvageable with tees and greens receiving their care. The bunkers though were let go but are now being restored as the club again begins to thrive.

The Island Golf Club is a place where you need to be on your game immediately as the first three holes play quite difficult on the opening nine. The same can be said for the first three holes on the back nine, meaning you can’t be hoping to find your swing as you move along. Overall, the course plays to less than 6,900 yards from the tips and is more manageable at distances of 6,300 and 5,800 yards on the middle tees, down to 5,200, and the shortest routing we came across off the front deck at 3,749 yards.

All in all, the Island GC is challenging but fair with wide fairways and, if you can make it safely through the opening trio of holes on each side, you can expect to put a good number sown on your card at the end of the day. 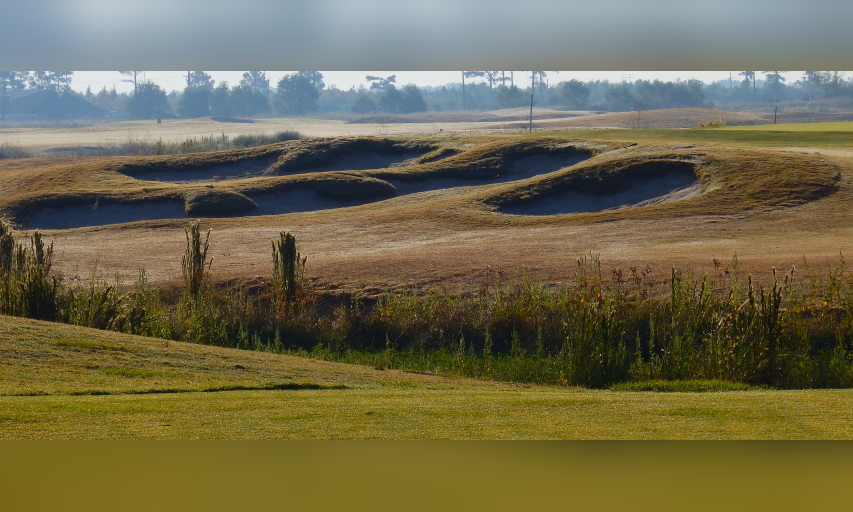 An Early Morning Fog Over The Wonderful Scottish Links-Style Course, The Mallard Golf Club In Lake Charles, Shrouding One Of The Many Bunker Complexes This City-Owned Facility With Low Green Fees Has To Offer.

This is the story of a new golf course built by tenacity if nothing else. The original layout in Lake Charles was purchased by an airport and the U.S. Air Force so they could add more runway space. The land chosen for the do-again, and designed by Jeff Blume, features rolling hills which were moulded into a Scottish links-style layout and it was successful in that endeavour. During the construction phase, the builders put up with two hurricanes as well as weather events, which were declared The Frost of the Decade and The Flood of the Century.

When this City-owned facility opened, it was to great acclaim and it continues to draw new players all the time. The layout at the Mallard GC features, as would be expected, a wealth of bunker complexes — 101 in all. Also to be expected in such a layout, there are only two carries over water. The first of those really doesn’t come into play if you hit it straight off the tee, but the one on the 17th hole is a forced carry over the liquid hazard to reach the green. Many of the putting surfaces here are elevated so an extra club on approach shots isn’t a bad idea. Interestingly enough, the Mallard GC has the only driving range in Lake Charles that is open to the public.

While the course has mounding, it is fairly level on the short grass but it’s not short in length. From the tips, the distance is almost 7,200 yards although it offers five tees, going down as low as 5,400 yards so there is somewhere for everyone to start from. Wind, as it should, plays a role here and when it comes out of the south can make this track play even longer. This is well-designed track, and a fun play which for such a low rate, is a place where you do want to tee it up as often as you can. 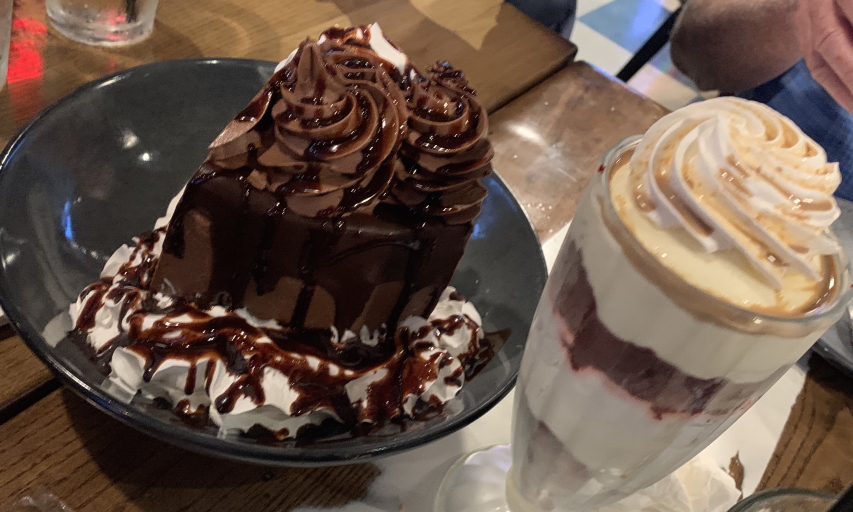 While The Appetizers & Main Courses At The Barstool Sportsbook In Lake Charles Were Wonderful, There Was No Topping The Desserts That Included Red Velvet Cheesecake (Right) & The Decadent Dark Side Of The Moon Ice Cream Cake.

In Lake Charles and Baton Rouge, as well as just about everywhere else on the Louisiana Golf Trails, you find incredible food whether you’re in a pub, a diner, or an exclusive eatery. We had the opportunity to sample all sorts of Cajun cooking and while many regard that style of cuisine as spicy, it is really not so. The seasonings used add flavour to the food rather than overpowering it.

Over the week’s trip, I sampled as much fare as I could of tastes not normally found in northern Alberta. At the Barstool Sportsbook diner at the L’Auberge Casino in Lake Charles, we sampled the chef’s creations of catfish sliders and blackened shrimp tacos (tasty) topped off with Red Velvet Cheesecake and Dark Side of the Moon (chocolate ice cream cake — absolutely delicious!). At different stops along the way, we sampled various taste treats including gumbo (an interesting mix of broth, rice, and seafood); jambalaya; boudin sausage (excellent); and smoked alligator (really good!). The one high-end eatery visited was the Palace Cafe in New Orleans, located at the foot of the French Quarter, where service and sustenance were first-class. Here, the menu is upscale with such offerings as Salade Lyonnaise with Duck Confit (arugula, frisée, caramelized onion, crispy duck leg, warm bacon vinaigrette, poached egg); Shrimp Tchefuncte (head on Gulf shrimp, Louisiana popcorn rice risotto, cremini mushrooms, Creole Meunière sauce); followed by decadent desserts such as Bananas Foster (fresh bananas, brown sugar, cinnamon, rum flambée, vanilla bean ice cream). 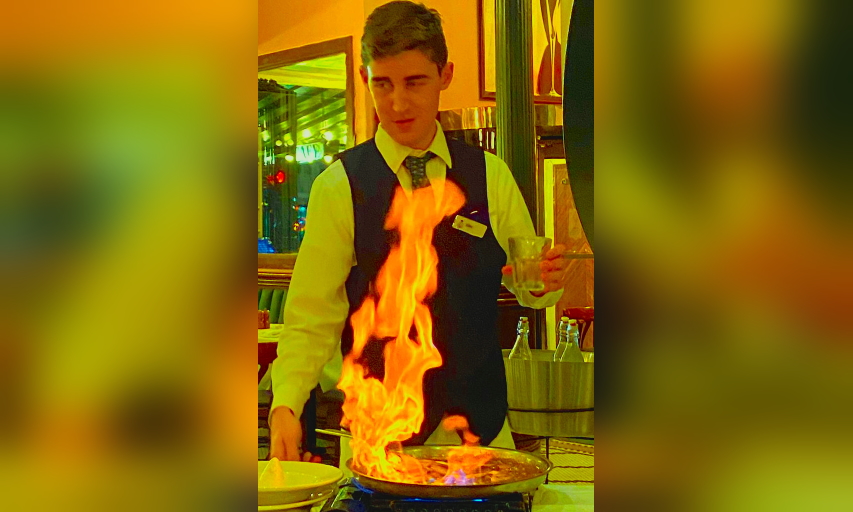 At The Upscale Palace Café In New Orleans, The Dessert Was As Much About The Preparation As The Taste Of The Delicious Bananas Foster.

All in all, the selection and tastes of food along the Louisiana Golf Trails along with the associated trails (below) mean when you visit this interesting state, you’re in for a great time whether you’re golfing, fishing, gambling, eating, or sampling all of those offerings.

Here are the websites of the places visited on this journey around Louisiana: